In the “Conversations on Legal Design” series’ third session, Prof. Helena Haapio gave an introduction to her work on contract design and — among other things — promoted “proactive law” as an alternative way of looking at law and contracts.

“Conversations on Legal Design” was a seminar series by UCLouvain in spring 2021. These are my selective and opinionated seminar notes, not a comprehensive documentation.More on #legaldesign

After the throught-provoking general introduction by Arianna Rossi and the deep dive into legal informatics with Monica Palmirani, Prof. Helena Haapio, of the Helsinki-based Lexpert consultancy, provided insight into a very concrete application of legal design: the design of contracts.

The session started off with a look into the problems with contracts: the legal system encourages incomprehensibility, to a degree where even law professors may have to admit that they don’t understand contracts they sign. A quote by Fred Rodell from 1936 illustrates that these are not new problems:

There are two things wrong with almost all legal writing. One is its style. The other is its content.

The issues range from endless walls of text, tiny fonts, no perceivable hierarchy etc.pp. to the content itself which, sometimes even intentionally, uses very complex language. This is encouraged by the fact that contracts, when contested, will always be searched for mistakes or omissions that may then be used by one party against the other in case of dispute.

Helena Haapio then presented the classic Double Diamond design process (essentially splitting the process into two phases of “designing the right thing” to reach a problem definition and “designing things right” to create the best solution possible) and its application to legal contract design.

In regards to the content, she suggested a four-step process.

While a lot of what was said could just as well apply to design in general, I particularly noted a few specific aspect of designing in the legal domain:

Personally, I am particularly intrigued by the opportunities for interaction design in this context. Contracts will obviously always require some kind of static format, but especially when talking about visualization and layering (a concept popularized by the GDPR’s transparency requirements) there is a lot of potential to use interactive technology to achieve “quality-simple” while maintaining complexity and ontological integrity. Ideally, this does not stay limited to open sections of collapsed text but more advanced interaction patterns as well.

In addition to the law-specific aspects of the design process when working with contracts, the most inspiring insight from this session came through the introduction to the concept of “proactive law”.

The proactive law movement, with a stronghold in Northern Europe, has evolved from “preventive law”, another interesting school of legal thought: assuming that “it usually costs less to avoid getting into trouble than to pay for getting out of trouble” (L. Brown, 1950), its goal is to address a (potential) dispute as early as possible — ideally already before it occurs — to increase the chance to find a good solution: minimizing the risk of a dispute, and making rights and obligations of the parties as certain as possible from the start.

In proactive law thinking, future problems are anticipated and actively prevented, instead focusing on sustainable relationships between parties, ensuring for example business success. Law is not seen as a constraint — or what one cannot do — but instead as a base to be in full understanding on what should be done. Hearing about this philosophy, it becomes clear it was no coincidence that contract design as part of the legal design discipline has its roots in Northern Europe as well: a well-designed contract is nothing else than a proactive step to develop good relationships and prevent legal mitigation pre-emptively.

Thinking back to the seminar series’ first session, this reminded me of Arianna Rossi’s third point of considering legal design as a means to imagine alternative futures. Using design thinking to reinvent the role and form of contracts appears to be a prime example of legal design challenging and improving established ways of how law is perceived and practised.

(One of many) tools: Pattern libraries

Last but not least, the seminar presentation introduced a range of pattern libraries — based on the idea that, since many contracts deal with similar topics, there is value in developing reusable patterns for contract design. The comprehensive IACCM Contract Design Pattern Library was introduced, along with a handful of example cases: 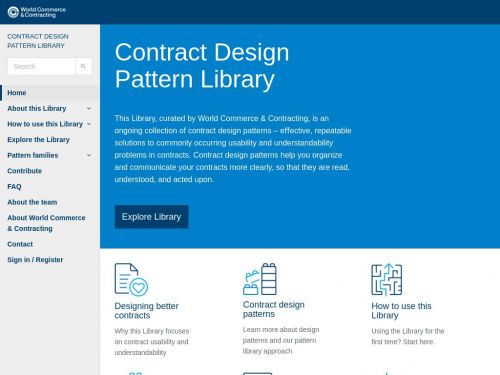 Identifying and sharing such patterns, the final slide concluded, can be considered an active step in promoting “proactive design”: by developing usable solutions to contractual challenges lawyers may face, designers contribute to the forward-looking approach of providing solutions, not conflict.

Read on: In the “Conversations on Legal Design” series’ final session, Dr. Zohar Efroni presented his perspective on legal design through the application of privacy icons.