Bookmark: "Is the fediverse about to get Fryed? (Or, “Why every toot is also a potential denial of service attack”)"

Is the fediverse about to get Fryed? (Or, “Why every toot is also a potential denial of service attack”) 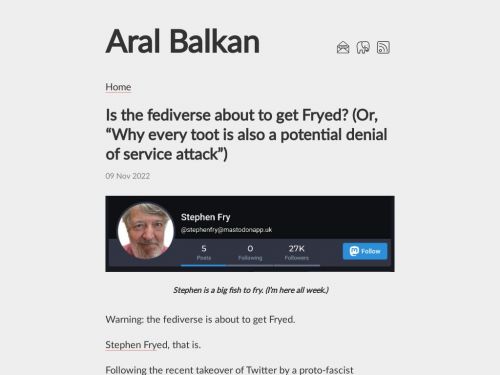 Aral Balkan presents an example how the massive amount of communication involved with federation can turn operating a Mastodon instance into a liability.

[…] you see, there is such a thing as too much of a good thing. And, on the fediverse today, that appears to be “engagement when you’re popular.” In fact, it could be deadly (to Mastodon instances, that is).

Simply thanking people for birthday wishes to require such massive computing resources makes me wonder about sustainability at large. Centralized services probably are easier to scale in an economical way, but I wonder just how much less energy efficient this is?

Either way, this is a really important insight for anybody planning to operate a ActivityPub server – and a reminder to look behind the surface of new technologies. Every technology comes with its own downsides: while fixing one issue, they might create new ones. Nothing replaces critical engagement with the “new and shiny”.