Bookmark: "My Grandma is Not a Cyborg"

My Grandma is Not a Cyborg 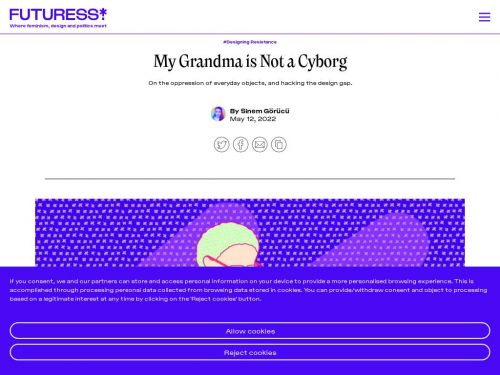 The story of early fighter planes designed for an idealized body type leading to about 90% of accidents due to operational issues is well known to anybody who ever attended a university class in usability, ergonomics, or “human factors”.

Sinem Görücü tells a similar tale through her grandmother’s experience, who does not fit the mold of the prototypical western end user (e.g. for furniture), through a famous sociologist unable to use her phone as intended because her hands are too small, through the Muslim doctor adapting her hijab to accommodate using a stethoscope, and through women wearing a hijab figuring out hacks how to wear protective masks during the Covid pandemic.

“In an era when we are capable of storing more data than ever, environments and products are still designed for standardized, ‘universal bodies’ that historically have always been male.”

This text is deeply political, and in that a declaration of love to the process of hacking; in the professional sense as much as in everyday life, but most importantly as a feminist act:

Hacking is a form of resistance. […] When I talk of hacking, I’m talking of a counterattack to the oppressive power systems.

Just as the hand-written “pull” sign on a door whose affordances shout “push” to every passer-by is an indication of a usability problem, every single such hack is a statement about designers not doing their job of creating for others than those resembling themselves.