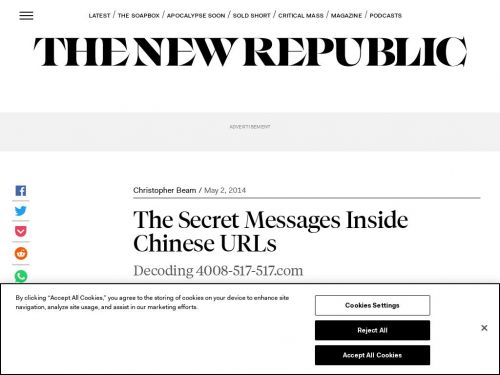 At first sight, this article may not have much to do with accessibility or inclusive design. Yet, after reading it, I suddenly realized how even my own thinking, deliberately tuned to think in an inclusive, prejudice-free way wherever possible, has been biased by a preconception of something I do not fully understand.

Christopher Beam starts from the (apparently) odd use of numbers in email addresses and URLs in China, something that in the western world often has a connotation of “spam” or being trashy. I mean, as we are all used to representative email addresses to look like firstname.lastname@company.com, who would choose 62718298454@163.com as their email? That must be some automated spam robot!

Turns out there is a range of good reasons for this, and this actually has a lot to do with how the internet’s domain system is tailored to Roman script first and foremost. But there is also a strong cultural component related to the meaning of numbers (along with strategies to navigate certain ambiguities with the transliteration of Chinese script to the Roman alphabet) – something we may not understand but, even unconsciously, dismiss as something that “cannot make sense”.

Just one of many enlightening examples in the article:

The digits in a domain name usually aren’t random. The Internet company NetEase uses the web address 163.com—a throwback to the days of dial-up when Chinese Internet users had to enter 163 to get online. The phone companies China Telecom and China Unicom simply re-appropriated their well-known customer service numbers as domain names, 10086.cn and 10010.cn, respectively.

This is not just an interesting read, it is a very welcome reminder to always question one’s own assumptions and be ready to identify and erase bias from one’s own thinking.

Still, the numbers/letters divide is emblematic of the Internet’s built-in bias: Even more than two decades after its birth, it’s still a fundamentally American system.