Bookmark: "The New Requirements for WCAG 2.2"

The New Requirements for WCAG 2.2 visionaustralia.org 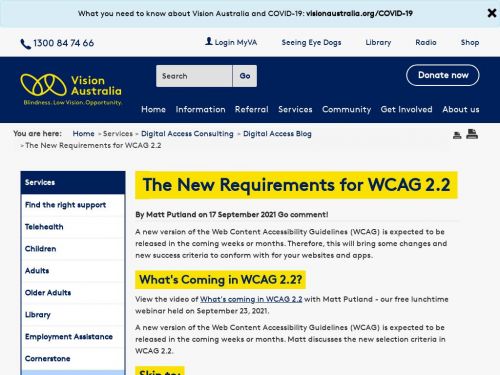 While WCAG 2.0 and 2.1 are the current standards demanded by many legislative frameworks, work is well under way towards the next version, WCAG 2.2, which can also be expected to become the overall baseline at some point.

Hence, this review of the drafted requirements is an interesting read.

For UI design, the particularly interesting changes relate to focus indicators. The current rules essentially define sometimes very difficult to perceive focus indicators to suffice the requirement of “being visible”, the draft of version 2.2 sets a lot stricter rules: focus indicators of the future will have to have the usual 3:1 color contrast, a certain minimum size, and must not be obscured by other UI elements.

Another interesting one is the target size of clickable UI elements, where the a minimum of 24x24 pixels would in the future not only apply to conformance level AAA (as with WCAG 2.1) but AA – which is the minimum requirement in many contexts where accessibility is legally required.

There are a few other interesting tidbits in the article as well.

While currently still a draft, it is rather likely that these criteria will sooner or later land in daily practice. And since they benefit inclusion even before formally demanded, today would be a good day to start designing better focus indicator and upscale interactive buttons etc.