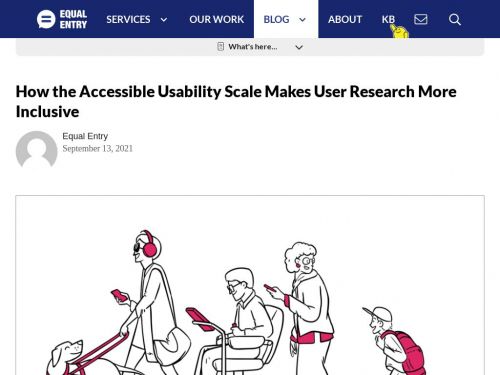 This looks like a very interesting impulse for more inclusive UX research:

Fable released a tool called the Accessible Usability Scale , which we have made freely available. It is specifically meant for conducting research with assistive technology users. The AUS is a 10-item questionnaire that has the same scoring structure as the SUS. The key difference is that AUS is inclusive of the abilities and experiences of assistive technology users. It is not meant as a replacement. Rather, the tool is a complement to ensure that usability measurement includes everyone.

The AUS, openly available under a CC-BY license, is essentially a scoring card system that focuses on the perceived usability by users of assistive technology and can be used as a survey tool:

A good example to illustrate the approach: where a common UX metric may be “I would imagine that most people would learn to use this system very quickly”, the AUS instead asks “I would imagine that most people with my assistive technology would learn to use this website quickly” – a small difference in wording, but a massive difference in acknowledging that people have different abilities.