The history of communication technology is not just a collection of – often curious – inventions and developments, but also a valuable reminder that even most things we consider “innovative” today likely have roots far back in time. A recent blog post motivated me to finally write up one of these historical curiosities I encountered in the most unlikely of places: the countryside outside Berlin.

“A Quick History of Digital Communication Before the Internet” by Zack Bloom (discovered via Jeremy Keith, who often tells tales of how technology evolved) is a write-up of some milestones in “digital” communication history (it starts with horseback messengers, hence my quotation marks) and thereby sheds some light of a few of the technologies we take for granted today.

A Quick History of Digital Communication Before the Internet eager.io 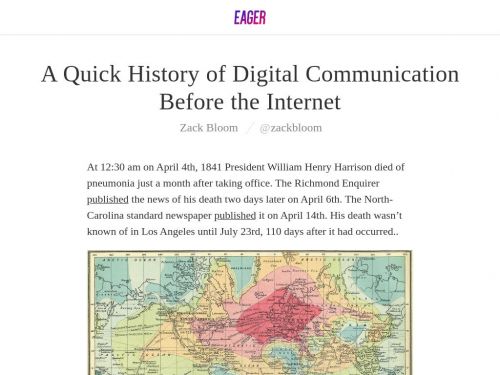 It’s always inspiring to look at the history of how things have evolved over time. And I like the inclusion of the equestrian Pony Express as an early form of digital communication:

If the average rider carried 1280 1/4 ounce messages (the billable weight at the time), each letter being roughly 100 words, it equates to about 640 kilobytes of information. Over ten days, this adds up to a data transmission rate of about 6 bits per second, albiet [sic] with latency numbers which would strike fear into the heart of the stoutest of multiplayer gamers.

This reminded me of one of my favourite “real world” discoveries of the past two years, as Covid-induced travel restrictions have led to thorough exploration of Berlin’s wider surroundings by bicycle. One day, I came by an odd structure on top of a hill.

It was a night ride, and some people had a party next to the info board, so it was only back home that I learned what I had encountered:

The Prussian Semaphore System (much more detailed explanations on the German Wikipedia and this dedicated website) was an optical telegraph line – the longest in Central Europe at its time – that allowed the Prussian government in Berlin to stay in better control of politically fragile areas in the South-West of Germany. This technological advance (the technology was invented at the end of the 18th century in France) well predates the Pony Express – though of course the population density in Europe does not quite compare to the geography in the US – and was a masterpiece of Prussian engineering …and administration.

Maybe somebody more mathematically inclined than me would like to calculate and compare the throughput to the 6 bits/s quoted for the Pony Express? The German Wikipedia article (an apparently auto-translated version is available here) dives deep into the functional principle of the system, which included “compression algorithms” (messages were shortened to speed up transmission), a sophisticated encoding algorithm and other fascinating details that – again – resemble a lot of the efforts in developing communication technology to this day.

Today, none of the original stations are preserved, but several replica of the signal masts have been set up as memorials.

It’s always interesting to explore how technologies came to be, as it also helps making sense of today’s technology. After all, these things to build on top of each other. The optical telegraph brings to mind a range of things that may have been influenced by it – from fibreoptic cables to QR codes.

And writing this reminds me of this eight years old bookmark on a book I – to this day – never ended up reading:

This is the story of the oddballs, eccentrics and visionaries who were the earliest pioneers of the on-line frontier, and the global network they constructed — a network that was, in effect, the Victorian Internet.

Addition 2022-11-16: Anton Howes published a thorough walkdown of the history of this kind of beacon telegraphs:

Age of Invention: The Beacons are Lit! antonhowes.substack.com