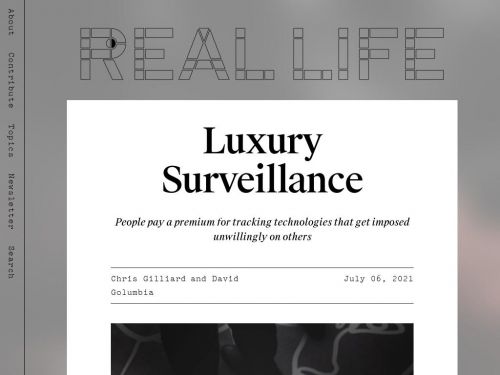 Chris Gilliard and David Golumbia present “Luxury surveillance” as the voluntary choice by the privileged to use technology that tracks them (often for purely perceived benefits or status) which in other contexts (law enforcement, refugees, etc.) is perceived as undesirable:

What does it say about our society’s adoption of technology that such different cognitive frames can be used to understand and obfuscate two faces of what is essentially one technology — that some eagerly adopt what others must suffer? And what purpose is served by this two-pronged approach to promoting surveillance?

The key point they make is that mainstreaming surveillance technology (and the business models behind; aka. surveillance capitalism) contributes to establishing them as an acceptable standard – hurting those who don’t have the privilege to have “nothing to hide”, as the privileged (erroneously) believe:

[…] we need to recognize that voluntarily adopting surveillance isn’t an isolated choice we make only for ourselves but one that impacts others in a variety of ways we may not recognize. We need always to be asking what exactly it is that we are enthusiastically paying for, who “we” are and who is the “them” on the outside, and what all of us are being made subject to when we allow (and even demand) surveillance technology to proliferate as wildly as it does today.

This is such an important thought that everybody wearing a smartwatch, using “smart home” products or uploading their workout tracks to a centralized platform should be aware of: by using these out of a (perceived or real) position of privilege, they contribute to normalizing systematic surveillance on a societal level. As do designers who create such products or even just, often without thinking, add a tracking script to a website.