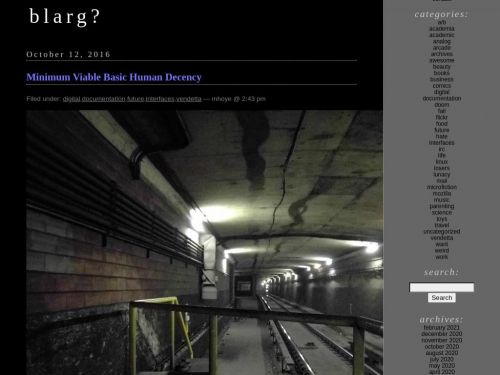 In this 2016 post, Mike Hoye presents a “Minimum Viable Set of User Stories” as a baseline of what software needs to enable to qualify as an MVP. It includes items such as

These are exactly the user stories that are commonly not even remotely considered when MVPs are created. Yet these would be the most importing stepping stones for building considerate, responsible and sustainable technology. There are aspects of inclusive thinking (i.e. accessibility), of technology non-use, of weaponized design and many more.

The list is also published on Github and the author states several influences:

This was inspired by a combination of things, starting with Joel Spolsky’s now-ancient “Twelve Steps To Better Software” post and Atul Gawande’s “Checklist Manifesto”, washed down with a few dozen pages of early automotive and highway safety legislation.

And this could be extended endlessly, as the realities of human life are so much less one-dimensional than most tech teams seem to commonly assume. One I encountered a while ago (and it’s not even a real “user story”, just a fact) is a password recovery question asking for the user’s mother’s maiden name (not that I encourage collecting such information in the first place; hello GDPR and data minimalism) but not allowing last names with less than six characters:

Periodic reminder that not everyone has a “first name” and a “last name”.

— Eric Eggert 2019-10-03
Reply to a Tweet by Eric Eggert
“Periodic reminder that not everyone has a ‘first name’ and a ‘last name’” ..and that not all names consist of six or more characters