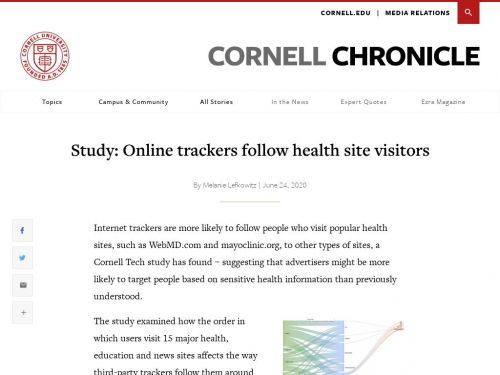 The study “Unaccounted Privacy Violation: A Comparative Analysis of Persistent Identification of Users Across Social Contexts” by Sivan-Sevilla, Chu, Liang & Nissenbaum builds on Helen Nissenbaum’s concept of contextual integrity (the idea that, while information may flow within certain contexts, privacy gets violated where data crosses the boundary between such contexts).

The researchers investigate how web users are tracked across different contexts.

While, in the past, health websites have been found to generally contain less trackers than other sites, this study highlights how health websites are particularly likely to set third-party identifiers that follows users as they continue into other contexts on the web (such as news, or education).

From the original publication:

We showed how advertisers value healthcare data and increasingly deploy persistent identification practices from this context to others. Also, there are certain bonds between trackers who operate simultaneously in different social contexts (e.g. health and education) and utilize that to deploy practices against our privacy expectations

Knowing the unethical industry that tracks web users across the internet, the fact that trackers do not respect contextual boundaries is not exactly a surprise. Yet, the dissemination focus on the concept of contextual privacy is an interesting contribution to the debate. It is not only the amount of tracking (or, one could argue: the fact that it happens at all) that is problematic, but its quality/extent as well:

Healthcare websites, which were regarded by previous works as relatively less dangerous from a tracking perspective, are actually the most alarming ones, when it comes to persistent identification trends.

Websites with less trackers, the study illustrates, may actually be more harmful in their privacy violations than sites with dozens of them.