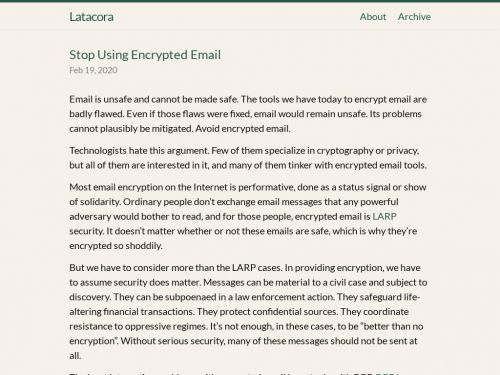 An interesting perspective on “encrypted email” in this article. It is not so much concerned with the strength of encryption, but with the systemic insecurity inherent to the system of email as a by-default open and interoperable system:

You can reasonably want email to be secure. Pray for a true peace in space! And we don’t object to email security features, like hop-by-hop TLS encryption and MTA-STS, that make the system more resistant to dragnet surveillance. But email cannot promise security, and so shouldn’t pretend to offer it. We need clarity about what kinds of systems are worthy of carrying secrets and which aren’t, or we end up with expert-run news publications with mail spools full of archived messages, many presumably from sources, along with a roadmap to all the people who sent those messages and upon whose operational security competence their safety depends. And that’s the best case.

In a nutshell, the argument is that email has so many points of failure (from accidental “unencrypted reply” to no control over archived copies on the receiving end etc.) that “encrypting” messages suggests a security that isn’t there.

Reminds me a bit of the “private browsing” mode in web browsers that may also suggest more security than it actually provides: 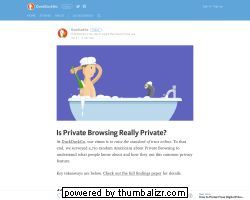 Bookmark: “Is Private Browsing Really Private?”
DuckDuckGo, the provider of a search engine that doesn’t track its users (see my earlier blog post), did a study about how […]