While designers and technologists are all obsessed with usability (and rightfully so!), this little-observed topic of “abusability” deserves more attention.

Ashkan Soltani plans to give a talk centered on an overdue reckoning for move-fast-and-break-things tech firms. He says it’s time for Silicon Valley to take the potential for unintended, malicious use of its products as seriously as it takes their security. […] tech companies need to think not just about protecting their own users but about what he calls abusability: the possibility that users could exploit their tech to harm others, or the world.

This starts with every single participant in the design process – for me, the discussion around “abusability” is closely connected to “weaponisation”: 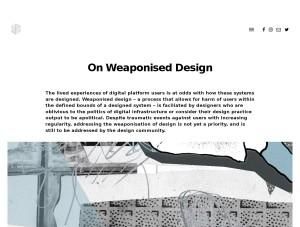 Bookmark: “On Weaponised Design”
This may well be the most comprehensive article I’ve read this year so far on the topic of the ethical responsibility of […]

Designing for people means to also take into account the unintended consequences from the get-go. Technology does not exist in a void, but has real impacts on users and non-users alike.