Bookmark: "Design Ethics and the Limits of the Ethical Designer"

Design Ethics and the Limits of the Ethical Designer viget.com 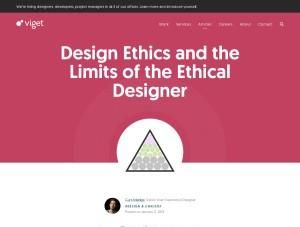 Every year, a handful of texts blow my mind on first read. “Design Ethics and the Limits of the Ethical Designer” by Curt Arledge is the very first one of those for 2019 - an important contribution to the discussion of what exactly is “ethical” design and how it affects the design profession.

The essay, written by a designer with a social science background, addresses an experience of many practitioners: the intrinsic conflict between the (recently almost omnipresent) mantra of “ethical design” and the sheer complexity of turning around globally established structures while having the limited influence of an individual professional.

By describing three “Layers of Digital Design Ethics” (the key theoretical contribution of his piece), Curt Arledge illustrates how far the layer commonly accessible for designers - the “interface layer” of specific and concrete interface decisions - is removed from the layers where the true “ethical turn” has to take place: the “business layer” and, at the root, what he calls the “infrastructure layer” - so abstract and systemic that it is commonly far out of reach for designers wanting to influence its ethical foundations.

In the vast majority of organizations, business-model decisions fall outside of the purview of people with “designer” in their titles. If it seems like this model frames designers as somewhat auxiliary to the rest of the pyramid, that is my intent. This can be a tough pill to swallow, but it’s an important point to make.

I am not trying to let designers off the hook or give you a feeling of helplessness. I just want to be realistic about this hierarchy of decision-making, and make the point that putting ethical digital things into the world is an uphill battle for designers.

An uphill battle it is. When the business and infrastructure layers breathe the toxic air of late capitalism, even the most motivated designer, with the highest ethical motives, has only very limited means of influence (though I strongly agree when the author points out that “there is much that we can do right now to design more humane interfaces, like following accessibility guidelines, recruiting inclusively for user research, and balancing efficiency with transparency to keep users in control.” - ethical design covers UI level details just as much as rethinking technology at large).

As digital designers, our professional domain is built on top of an infrastructure that has been designed to serve a few giant companies rather than the health of our society, human relationships, and democracy. And as designers, we are pretty much powerless to change it. The design of this infrastructure is a fundamentally political challenge and that we will only solve as citizens, not designers.

That last sentence is why this essay is so important: the author stresses how the challenge of “ethical design” is not purely a quest within the professional realm, but requires that those skilled enough to understand how weaponized technology threatens our societies become political actors and radical innovators:

We should all be deeply embarrassed by the technical cluelessness of our elected representatives. It’s our responsibility to pull away from designing screens and “experiences” and lend our skills to the design of policy. It’s infinitely less sexy than the interface, but it’s so much more important.

There is so much valuable thinking in this piece, I strongly recommend the full read (including a range of links to key texts on the issues covered). Yet, I cannot resist to post one more quote from the final paragraphs - in it, the author makes the case for why the shift towards “ethical design” also means a paradigm shift of the role and responsibility of design professionals:

An expansive definition of “design” as the accumulation of all the decisions that result in some digital artifact gives designers a more nuanced understanding of the ethical landscape and our place in it. […] Designers are well equipped to confront thorny ethical problems, but these problems won’t be solved from within our comfort zone at a neatly arranged desk with a cinema display. The true problem solvers among us won’t wait for an invitation to participate.