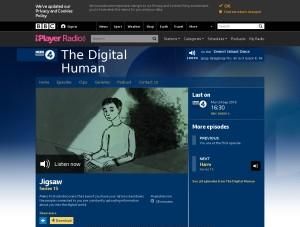 Even if you are the most careful person in the world when it comes to your data, little pieces of your personal information are constantly being uploaded into the digital world without you being aware of it. How? Because of your connections to everyone around you.

In just about 28 minutes, the “Jigsaw” episode of the BBC’s “The Digital Human” podcast makes the case for why “privacy” is beyond the control of an individual and actually a societal, rather than a personal concept.

Discussing, among other things, how “data ownership” is different from “owning things” in that the latter is a question of property and the former a question of human rights, the podcast explains why it is so difficult to deal with personal data as if it were something a person can control like handing on a physical object.

It illustrates how people, even unknowingly, make privacy decisions on behalf of others: sharing their contact list with a social network is rather obvious, but the case of a person accused of a crime based on a DNA sample their parents gave to researchers over a decade ago is a chilling example of why even seemingly “safe” disclosure of personal data can backfire when combined with other data later.

This is such an interesting - and important - debate, and it reflects some of the key issues brought forth during several talks at the recent Privacy Week Berlin as well: protecting the human right to privacy is something that cannot simply be solved by providing people with consent forms. The Podcast episode does a great job in making the rather abstract formula that “privacy is not about individuals’ decisions” tangible through real-world examples.