Bookmark: "'Our minds can be hijacked': the tech insiders who fear a smartphone dystopia"

'Our minds can be hijacked': the tech insiders who fear a smartphone dystopia theguardian.com 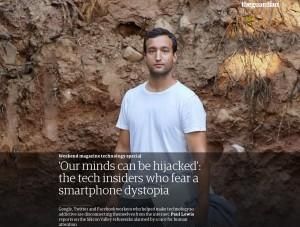 I have been observing and researching non-users and their role in design for over eight years now. Recently, the non-use discourse in design has started to evolve mainly into investigating the question of how researching people’s motivation for not using a technology can inform processes for the benefit of better design.

The phenomenon described in this long-form piece on the Guardian by Paul Lewis, however, takes this aspect to a new level: reading why techies stop to use technology they themselves have created highlights how a lack in consideration of the long-term impact of technological advancements (and whether such assessment is even humanly possible is up for debate, I believe) can damage not just products and brands, but potentially society at large.

“It is very common,” Rosenstein [ed.: the developer first prototyping what later became the “Like” button] says, “for humans to develop things with the best of intentions and for them to have unintended, negative consequences.”

There is so much food for thought in this article on what would have to change in order to design technology that truly is of value to people and society, rather than - for example - focus on how to create products that are so addictive that even their inventors have to hire managers to keep them away from using them.

Finally, Eyal [ed.: irconically, the author of bestseller book “Hooked: How to Build Habit-Forming Products”] confided the lengths he goes to protect his own family. He has installed in his house an outlet timer connected to a router that cuts off access to the internet at a set time every day. “The idea is to remember that we are not powerless,” he said. “We are in control.”

But are we? If the people who built these technologies are taking such radical steps to wean themselves free, can the rest of us reasonably be expected to exercise our free will?

As the article mentions, a lot of the logic of persuasion and addiction in design stems from a flawed mindset the advertising industry has brought upon the technology industry. Myself, like others, still believe that once the mindset of wanting to lure people into using something has been overcome, designing with human values in mind does not have to be bad business at all.