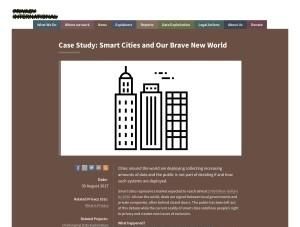 Uh-oh. While generally enthusiastic of using technology for solving mankind’s problems, and with the global phenomenon of urbanisation amassing plenty of those, this analysis by Privacy International drawing a grim picture of the forces at play around much-hyped “smart cities” makes me cringe:

Smart cities represent a market expected to reach almost $760 billion dollars by 2020. All over the world, deals are signed between local governments and private companies, often behind closed doors. The public has been left out of this debate while the current reality of smart cities redefines people’s right to privacy and creates new issues of exclusion.

As a sociologist, social inequality is one of my major concerns when looking at societal developments, and indeed: “smart cities” driven by invasion of privacy and leading to discrimination and security threads ultimately seem to not serve cities as a whole but to reinforce existing power structures and further disempower those already disadvantaged.

There is a lot of potential in making technology work for the benefit of citizens at large, but some of what is labelled the “smart city” does not seem to serve that purpose. Yet, as Privacy International states, there are ways to change this:

Governments should seek to improve the quality of cities by prioritising solutions that are not based on data exploitation. […] Citizens should be warned when data is collected and given the option to have their data deleted and they should have a right to be anonymous in a public space. Access to technology should never be the condition to have access to services.

The right to be anonymous in a public space as well as the open and equal access to smart city tech benefits are values that must not be forgotten as we fill our cities with technology that may serve only the interests of some.