Bookmark: "'I've Got Nothing to Hide' and Other Misunderstandings of Privacy"

'I've Got Nothing to Hide' and Other Misunderstandings of Privacy papers.ssrn.com 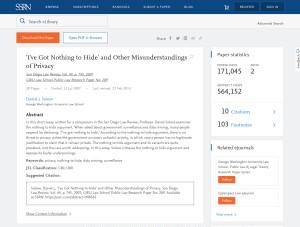 In this pre-Snowden essay from 2007 (PDF), Daniel J. Solove presents one of the most thorough attempts to disprove the “I have nothing to hide” attitude towards privacy I have encountered:

Solove introduces a four-fold taxonomy of privacy to illustrate just how marginal the “nothing to hide” aspect is in the broader consideration of what is privacy - a term we still today struggle to properly define and, hence, often leading to debates where two sides have a different understanding of what it is.

The author later published an entire book on the topic (which I haven’t read, but hereby add to my reading list).

Side note: reading the text, I cannot help but notice how much the privacy debate has developed in the ten years since; while back in 2007 “surveillance” seemed to mainly have been something practised by governments, in 2017 corporate surveillance has become the de-facto standard of business models in many industries, adding yet another dimension to the debate (notwithstanding the relevance of Solove’s taxonomy, which is just as valid when read with commercial rather than governmental actors in mind…)