Bookmark: "For the Moment" 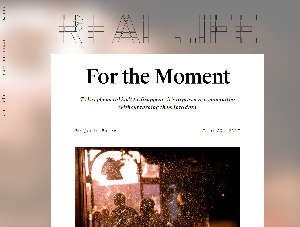 Largely building upon queer theory and its understanding of temporality, “For the moment” by Benjamin Haber elaborates on yet another aspect of human life that the digital economy believes to be able to solve by introducing a simple binary.

As it is being understood that the default of public and/or permanent does not meet all the needs users may have, the apparently logic solution is to offer its counterpart of “private and emphemeral”:

To treat ephemerality as a practice of withdrawal is to reinforce the narrow, static understanding of public and private that informs too many discussions around digital communication, framing online privacy as a matter of choosing between the normativity of mass communication or the implied deviancy of the secret.

But the reality is far from being that simple. Temporality is not the opposite of “public and permanent”, but rather a complex field of endless motivations and practices, often in contrast to established norms.

In the age of social media, we need a politics of the temporal, creating and advocating for diverse and delightful digital timescales, while decentralizing these sites of identity modulation and their enforcement of norms.

…an aspect to be considered outside of queer life worlds just as much as within. At the same time, and this likely is the second big challenge apart from overcoming traditional thinking patterns, establishing anything that is not binary is not without challenges when working with a medium that at its core is based on a binary system of zeros and ones. But texts like these illustrate just why it is so important to question the apparently obvious (zero/one) solutions and dig deeper to create technology that truly reflects human needs.