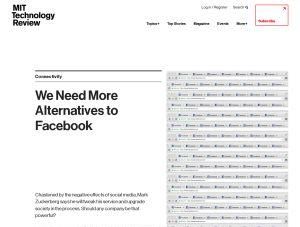 In an article on the MIT Technology Review, Brian Bergstein compares Facebook to the early days of televsion in the US:

The problem, the FCC chairman told the group, was the way the business was making money: not by serving the public interest above all but by airing a lot of dumb shows and “cajoling and offending” commercials. “When television is bad, nothing is worse,” he said.

…and stresses the major difference that with television it was possible to improve diversity of the offering as more channels entered the landscape. With Facebook, however, the problem is that not the channels on the medium lack variety, but that the medium itself - social interactions on the internet, to be precise - is a monoculture:

“I am deeply concerned with concentration of power in the hands of the networks,” Minow said.

That’s where Mark Zuckerberg would probably get a little uncomfortable. Because Facebook is all about concentrating power in one network—his, which he calls “a global community.” If in reality Facebook tends to promote polarization and tribalism, Zuckerberg seems to believe that can be fixed with a few tweaks.

Thinking this through, it does not require much thinking to see how strong a point Bergstein makes in calling for more, noncommercial, decentralized alternatives for engaging in social interaction online:

What if we followed Minow’s reasoning with TV in 1961 and decided that we ought to have many more powerful networks for disseminating ideas and shaping public discussions?

The first step would be to acknowledge that even with the seemingly limitless competition that already exists on the Internet, Facebook has an outsize role in our society.