Bookmark: "The Guardian view on big data: the danger is less democracy"

The Guardian view on big data: the danger is less democracy theguardian.com 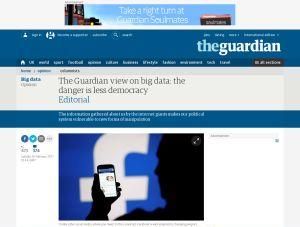 A Guardian’s op-ed on big data highlights the threat corporate surveillance poses not only on an individual level, but to democratic culture as a whole.

There are two kinds of privacy under threat in the emerging economy, where everyone is almost always connected to the internet, and has their lives enmeshed in big data. The first privacy is the kind that we intuitively understand […] But there is a second, more frightening loss of privacy as well. The unprecedented knowledge that the giants of the surveillance economy have acquired about us may disclose vulnerabilities of which we are ourselves unaware.

Thinking of the manifold ways “big data” corporations have to manipulate people and opinions, it is a stunning phenomenon how politically mature citizens happily feed a system that has (and actively makes use of) the power to undermine their personal and societal freedoms:

What we tell our smartphones about our lives, intentionally or otherwise, is far more than the most ambitious secret policeman of the last century could hope to discover by covert surveillance.

Often, “I don’t have anything to hide” is the easily used (yet flawed) excuse for the first privacy. It is much harder to come up with an excuse for giving up that second privacy…