Bookmark: "Why Nothing Works Anymore"

Why Nothing Works Anymore theatlantic.com 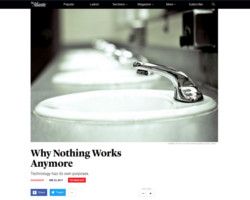 Ian Bogost, in this piece on The Atlantic, expands the notion of “precarity” from the economic into the technological sphere - the instability and unpredictability of (technological) objects:

The frequency with which technology works precariously has been obscured by culture’s obsession with technological progress, its religious belief in computation, and its confidence in the mastery of design. In truth, hardly anything works very well anymore.

From self-flushing toilets, through autocorrect and Amazon algorithms, to Facebook’s and Google’s business models, the author expresses the concern over the increasing gap between what humans need and what technology provides:

Technology’s role has begun to shift, from serving human users to pushing them out of the way so that the technologized world can service its own ends. And so, with increasing frequency, technology will exist not to serve human goals, but to facilitate its own expansion.

In the final paragraph, Bogost draws an image that moves the dystopia of robots taking over a technologized world from SciFi movies into the techno-centric culture of today:

It won’t take a computational singularity for humans to cede their lives to the world of machines. They’ve already been doing so, for years, without even noticing.