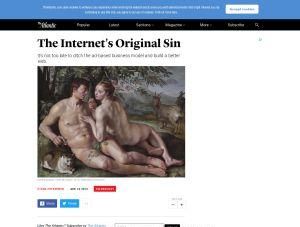 Ethan Zuckerman, director of the Center for Civic Media at MIT and describing himself as part of the actors who established the ad-based web, investigates how and why advertising became the backbone of the fast-spreading web and the negative consequences it has brought along - making it “The Internet’s Original Sin”.

In the mid-to-late 90s at peak “Web 2.0”, the prevailing intentions (such as those of Zuckerman) was to give the broad public access to the communicational wonders that is the World Wide Web, which up until then required a core set of rather technical skill. And this no doubt worked:

An ad supported web grows quickly and is open to those who can’t or won’t pay.

It is very likely the web would never have grown this fast without the described advertising models.

But this is where the “but” comes into play. Zuckerman lists four downsides of advertising as the default business model of the web:

Zuckerman comes to the conclusion that the ad model -regardless of any merits it may have had - being the default model for online business is a serious problem that needs to be overcome. Yet, solutions are only being explored.

There is no single “right answer” to the question of how we pay for the tool that lets us share knowledge, opinions, ideas, and photos of cute cats. Whether we embrace micropayments, membership, crowdfunding, or any other model, there are bound to be unintended consequences.

But 20 years in to the ad-supported web, we can see that our current model is bad, broken, and corrosive. It’s time to start paying for privacy, to support services we love, and to abandon those that are free, but sell us—the users and our attention—as the product.

This is an “old” article from 2014, but it has not lost any of its relevance.