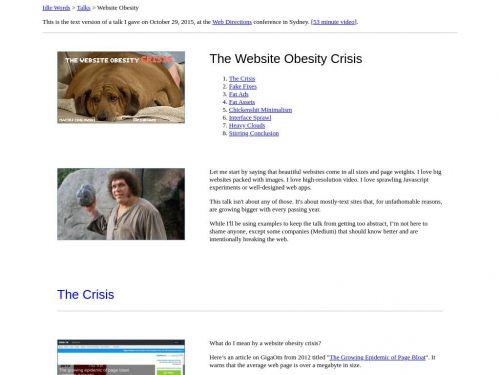 A burning rant by Maciej Cegłowski (aka. Idle Words) on the commercially introduced complexity (“obesity”) of the web.

Drawing a bow from ads to assets, the talk also introduces some rather innovative terminology:

Chickenshit Minimalism: the illusion of simplicity backed by megabytes of cruft.

Interface Sprawl […] Some kind of brain parasite infected designers back when the iPad came out, and they haven’t recovered. Everything now has to look like a touchscreen.

I love this. And of course fully subscribe to Maciej’s summary:

Everything we do to make it harder to create a website or edit a web page, and harder to learn to code by viewing source, promotes that consumerist vision of the web.
[…]
Let’s preserve the web as the hypertext medium it is, the only thing of its kind in the world, and not turn it into another medium for consumption, like we have so many examples of already. Let’s commit to the idea that as computers get faster, and as networks get faster, the web should also get faster.