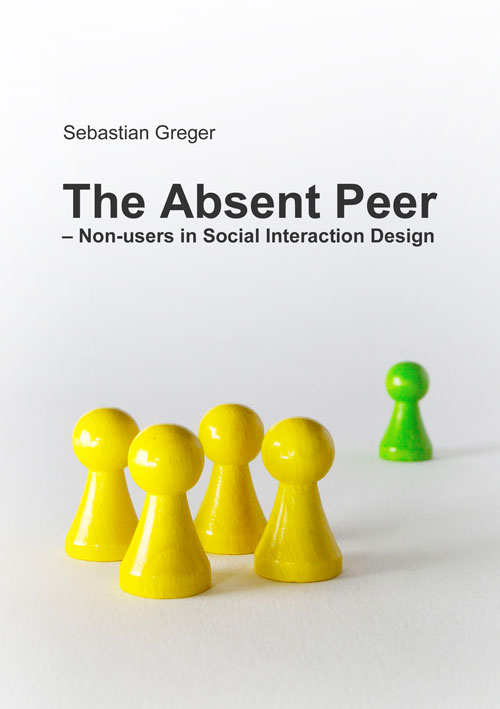 This research aims to provide a framework for the consideration of non-users in the context of social interaction design (SxD), in particular for the design of social network sites (SNSs). Below, I introduce the core of the work and provide the answers to seven frequently asked questions.

This page is available also in Finnish.

The theory of “The Absent Peer” consists of two core concepts, presenting the network aspect and the sociality aspect how non-use influences SNS concepts. Herein, the focus of the work is on the discovery of the impact of non-use rather than on its reasons.

“The Absent Peer” is the outcome from my thesis research project for the Master of Arts programme in New Media at the School of Art and Design, Aalto University Helsinki. It has been presented on 24 November 2010 and was awarded “Best HCI-related MA thesis” in the SIGCHI Finland thesis competition in 2011.

Building on the insights from the study, this report presents the conceptual considerations for the creation of valuable SNS concepts that acknowledge non-use as a permanent and complex phenomenon of social reality. The work is based on the sociological perspective of symbolic interactionism. Social interaction design is presented as a practice within the discipline of interaction design, with its goals defined through a discussion on user value and worth-centred design.

1. What is the contribution of this work?

A lot of the public debate about social media evolves around the emergence of opportunities, new business models and a revolutionary change in communication practice. Nevertheless, there is a problem emerging from the ever-spreading access to online media that is so far only being discussed in the context of the “digital divide”: the bigger the share of people using the internet, the more difficult it becomes to integrate those who are not there. As a designer, the aspect that I see regularly being overlooked is the impact of non-use on the interactions of those who are already users.

The real-life contacts of users that are not or not constantly present online have an impact on the value of online social network applications. This dissertation seeks for an understanding of how non-use affects both the users and the value of service concepts. It is the aim of my work to provide an analytical perspective on the connection between non-users and interaction design for social applications, posing the research question “how can non-use be conceptualised in the context of social interaction design in order to inform the design process for social network sites?”

2. Why do we need to rethink the concept of “non-users”

In most contexts, non-users – individuals not using the internet, social media or particular online services – are considered to be excluded people. The prevailing understanding is that they are people who, for one reason or another, have not yet gained access to the benefits that a technical application has to offer. In the concrete context of this research, I investigate the conceptual impact of non-use on social network sites (the backbone of what is referred to as “social media”).

In both policy making and design, the predominant answer to the phenomenon of non-use has long been to ease the access for those who are not yet users in order to make them users. Based on the assumption that being a user is the desirable state of being, politics support initiatives to guarantee internet access and improve digital literacy. Providers of online services on the other hand invest in finding the most effective mechanisms to make users turn their friends and colleagues into users as well. Neither of these approaches is wrong in itself, but I want to turn the attention to the fact that non-users will always remain a factor in social media despite the best efforts to eliminate them.

3. Who are these non-users and why aren’t they users?

A variety of research has been carried out to conceptualise non-users. Until about 10 years ago, research on non-users mainly investigated the reasons for involuntary exclusion. Only lately the academic discourse has been extended to investigate absence from technology use also from a broader point of view.

For example, a research group around Sally Wyatt presented a model that divides non-users into “have-nots” and “want-nots” and also emphasises that non-use does not only cover people who never gained access to some technology but also those who stopped using it; the behaviour of non-use may be an act of active resistance or passive avoidance. The motives for non-use are manifold and reach from a delayed adoption through a perceived lack of value for the individual to pure disinterest in the services offered, as Christine Satchell and Paul Dourish present in a recent paper.

Also, there is not just users and non-users, but also users who use a service only irregularly or only use parts of it (think of people who use “social media” but not Facebook) as well as those who use it passively or otherwise not as intended by the concepts. Therefore, recent research suggests to consider use and non-use as a continuum of the same phenomenon – non-use should be considered a special case of use.

4. How has this research been done?

Over a time span of two years, I collected data of how the absence of social peers from social network sites impacts the perceived value of these services for their users (participatory observations, unstructured interviews and a review of secondary sources). I set out to discover what impact it makes if the value proposition of a social media site is to facilitate the users’ interaction with their friends, but not all of these friends are there.

This auto-ethnographic research data has been analysed in a Grounded Theory process – a deductive qualitative method aiming at the discovery of theory contained in the data. It has to be stressed that a theory of this kind does not reflect generalisable truth, but aims at providing a model to facilitate an emerging debate. Therefore, the ultimate value of the theory discovered in this work is that of a framework helping to understand the phenomenon under investigation and to inform further development.

5. How does the theory of “The Absent Peer” explain the impact of non-use in social media?

With most social network services being based on a concept of social interaction within the service (like sharing stories or media among users, sending messages to other users etc.), the solution to the “problem” of non-users is often seen in attracting them to become users as well. This however ignores the fact that non-use is not something like an illness to be cured, but a constraint of the reality that social media acts within – and as pointed out above, even users show behaviour of non-use (partial use, temporary use etc.).

The theory that emerged from the research is based on two concepts that can be used to describe the conceptual impact of non-use in social network sites:

6. What is the different approach you propose for social interaction design?

By reducing non-users to “not-yet-users” and concentrating on providing tools for interactions between those who are users – and in addition trying to turn the non-users into users – we neglect one of the most innate needs of the users: the meaningfulness of the interactions they engage in. There is a need to explore more advanced ways to include non-use as a design factor in the design for social interactions than just send e-mail notifications or invitations to join a service.

Ultimately, the approach I am proposing in this work is a design process for social network applications that is based on the understanding of the worth these services have for their users in their social reality rather than thinking of value only regarding the interaction between their users. As social interaction designers, we have to acknowledge that people are not using social media for the plain purpose of using it, but as a meaningful element of their social toolbox to interact with their real-life peers.

7. What is the practical relevance of this research?

People use social network sites to engage in social activities through conversation about meaningful subjects. Therefore, they have certain expectations regarding the coverage (“How many of my peers are here?”), reachability (“Can I reach the majority of my peers through this?”) and utility (“Does this provide something of value for me?”) of a service – identifying these desired qualities and providing solutions that make a service meaningful despite the phenomenon of absence is a crucial step in order to take social interaction design to the next level.

A holistic approach to the design of social network applications enables the designer to create successful and valuable solutions that have the potential to take a real role in the social reality of their users, beyond the interaction with a limited sub-group of friends. The approach promoted in this work goes beyond thinking of the users and how they can interact with each other, to a broader context where a digital service is embedded in the social reality of both users and non-users.