Bookmark: "We can't thrive without friction"

We can't thrive without friction world.hey.com 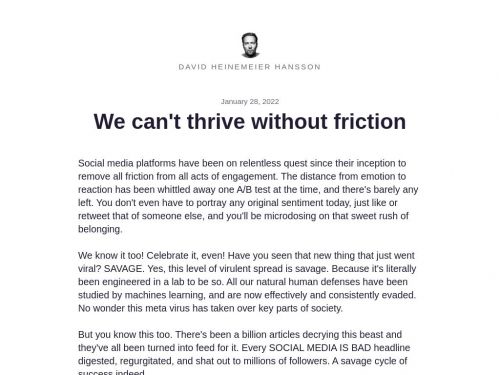 Not just due to my long-standing research interest in technology non-use, but as the ever-critical luddite in regards to “social media” adoption, I always enjoy reading so-called “silo-quit” stories.

I was moved to retire from engaging with my social drug of choice, Twitter. After tens of thousands of tweets across more than a decade, I vowed to stop responding to – let alone arguing with – strangers in that particular thunderdome of despair.

This article not simply praises the freedom from leaving Twitter behind, but establishes a concept that might be a healthy impulse for re-imagining the way online interactions can be mediated:

To prevent a relapse, I’ve replaced the free-for-all of the thunderdome with connections mediated by friction. The kind of friction the internet had since its inception, but that has been outrun by the virulence of the frictionless social media variants.

David Heinemeier Hansson (aka. DHH) describes this concept of friction as a “high-grade filter” – online interaction that is just one notch more difficult than simply pressing a button or quickly posting something through a provided input field:

What I’m getting at here is that friction is a feature! Whittling it all away such that every little impulse of every little person is connected to an outlet of expression is perhaps the worst crime committed by the modern internet, as dominated by social media as it is.

Friction as a feature – I quite like that thought!